Charlotte La Bouff, usually nicknamed Lottie, is the daughter of Big Daddy La Bouff, the richest man in New Orleans in the 1910's. Big Daddy spoils Lottie, and notably often commanded princesses dresses to the seamstress Eudora. The latter often bring Tiana, her daughter of the same age, to work. And she used to tell fairy tales to the two little girls. Lottie enjoyed them quite much, explaining why she loved princesses stories and dresses. In fact, Lottie wished to become a princess, and said she was capable to kiss a frog to achieve this goal.

When Lottie become an adult in the Roaring Twenties, she still love pink, princess-like disguises, and continue to wish to become one (usually on the stars) . And despite still spoiled by her father, Lottie is quite nice, and still friends with Tiana.

For Fat Tuesday, Big Daddy invite foreigner Prince Naveen to a party. Naveen needs money, having funds cut short by his parents, thus he need to marry a rich girl. And Lottie, if she marries him, will be able to become a princess.

Two days after their first meeting, Naveen ask for her hand, and delighted Lottie decide they'll get married during Fat Tuesday 's parade. But during it, "Naveen" turn out to be actually Lawrence, Naveen's servant, turned into a body double of the prince, by voodoo magic. The real Naveen was turned into a frog, still because of voodoo. But a princess 's kiss can turn him back.

Because her father was elected king of Fat Tuesday, Lottie is a princess (of Carnival) for one day. Tiana already tried to turn back Naveen, but been turned into a frog in the process. While traveling together, she and Naveen fell in love, and when she learn that, Lottie offer to transform Naveen into a human without the latter having to marry her next. Unfortunately Lottie kiss Naveen after midnight, and it have no effect.

After, Naveen and Tiana get married, turning the latter into a princess, and when she kiss Naveen, it bring both of them back to their human form.

Tiana latter open a restaurant, and during a party there, Lottie dance with Naveen's younger brother. The problem is, the boy is six and a half. "Well, I've waited that long" conclude Lottie.

Lottie is cheerful, energetic, romantic, idealist. Despite rich and spoiled, she is a nice, generous person. Like Cinderella 's stepsisters, she want to marry a prince and finally fail to fulfill this goal, but unlike them, was not an harpy mean to the heroin. 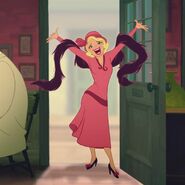 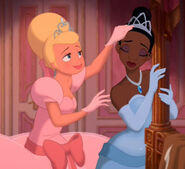 Add a photo to this gallery
Retrieved from "https://the-princess.fandom.com/wiki/Charlotte_(The_Princess_and_the_Frog)?oldid=2819"
Community content is available under CC-BY-SA unless otherwise noted.