Cinderella lost her mother, then father, and was left all alone with her stepmother Lady Tremaine and her two daughters Anastasia and Driezella. The later forced her to do all her chores, but she remain gentle, as said in the narration. She asked to go the ball given for the Prince, but when she showed up in a dress done by her mice and birds friends, her stepsisters torn it into pieces.

Fortunately, Cinderella fairy's godmother shows up, give a new dress, glass slippers, and a carriage made from a pumpkin. Cinderella must remember to be home at midnight, but forget the hour while dancing with the prince and must go all of a sudden, losing a slipper in the process.

The next day, the grand duke come to try on the slipper on Cinderella's stepsisters. The heroine is locked in the attic by her stepmother but freed from it by the mice, and run in the living room while the duke was about to go. Lady Tremaine break the slipper, prompting Cinderella to provide the other, proving she's the one the prince fell in love with. She then marry the prince charming.

Despite being often described as weak, Cinderella is actually strong-willed, as she keep her joy (except the brief moment when her dress is torn into pieces). She's clever and ressourceful, having the idea to turn her mother's old dress into a modern ballgown. She can even be slightly sarcastic towards her step-family, but keep her comments for herself. And in Cinderella III: A twist in time, she is shown to be quite badass in addition to all this, having to get back her prince all by herself after time turned back. 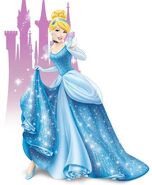 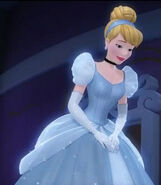 Add a photo to this gallery
Retrieved from "https://the-princess.fandom.com/wiki/Cinderella_(Disney)?oldid=2825"
Community content is available under CC-BY-SA unless otherwise noted.