The princess Wikia
Register
Don't have an account?
Sign In
Advertisement
in: Persons, Fictional characters, Disney princesses,
and 10 more

Vanellope is a character who live in an arcade of the game Sugar Rush, a kart racing video game in a candy land. She is nicknamed the "glitch", because according to others racers Vanellope was not even supposed to be in the game. Vanellope suffers interference, can't quit her game (others characters can wander in others games of the arcade) and cannot race. However, she does not lost courage and craft a car all by herself. Unfortunately, it is destroyed by others racers.

Right after, Vanellope meet Ralph, the brutal villain of the game Fix-it Felix , who is fed up with being an antagonist and just won a medal in the game Hero's duty, in order to show it to the others characters of the game. Vanellope take the medal and rush to use it as gold coin, and register for the next race. (as a glitch, she couldn't own one). Ralph, initially furious, help Vanellope to break in the factory where you can make your own car.

Thus, Vanellope is able to do the race...But King Candy, the local sovereign, tries to prevent her to do so. Turn out that "King Candy" is actually Turbo, the hero of another game that been unplugged years ago. Turbo took refuge in Sugar Rush, and used a cheat code to modify his appearance and wipe memories of others inhabitants.

King Candy is finally killed by "cy-bugs", the villains of Hero's duty. Vanellope returns in her car and finish the race. As soon as she manage to cross the line, she is restored to her previous aspect: a princess one. Memories of everyone are also restored, and they remember that Vanellope used to be a legal sovereign. To take her place, Turbo/Candy used a cheat code to become the king instead of the princess, the latter couldn't be erased but became a glitch instead.

However, Vanellope decide to declare the monarchy a republic instead, and claim herself president.

In the sequel, Ralph breaks the internet, Sugar Rush wheel game is broken. Vanellope is without a game, until Ralph and her go to internet through the newly installed wifi. They try and finally success to buy a wheel on ebay. On the road, Vanellope go to the site Oh my Disney and meet the fellow princesses Disney. She also visit the online game Slaughter race, and is seduced by it to the point she decide to permanently stay in the game (with her code integrated to it).

Vanellope is quite sarcastic due to years of bullying and often tease, but she is also determinate, courageous and energetic. She is quite crafty and intelligent, being capable to make a car all by herself.

-She appears in Wreck it Ralph and Ralph breaks the internet .

-Her kingdom is the game Sugar Rush.

-She have no parents, and have much of a queen role. Ralph breaks the internet confirms she was conceived without relatives. When asked by others Disney princesses if she have daddy issues, she answers: "I don't even have a mom".

-She decide to become a president, but presidents must be elected, and you cannot become one before, at better, 26 (depending of countries). Thus Vanellope is too young and unconstitutional; on the other hand, being a princess is possible at any age.

-It did not seems to stick, as in the beginning of Ralph breaks the internet, Taffyta, a fellow racer, calls her "Princess". Vanellope admits she is one, even if she'd rather be a pilot. Later, when she meet the official Disney princesses, she introduce herself as a princess to them.

-You are one, even in destitution. Thus, despite she claims otherwise, Vanellope is still a princess.

-She is a Disney princess, but not an official one due to being a child and a deuteragonist.

-The princesses scene seems an homage to many fanarts, where Vanellope meets the Disney princesses, made after the first film. Also, this fanart(2006), was made canon in the promotion.

-The Disney princesses take inspiration from Vanellope when they see her modern clothes, and make, then wear some they made for themselves. Actually some of them do have "comfy" clothes (alternatively with the ball dress, or from the origin). What they don't have were 21st century clothes, which was the novelty.

-They also discuss the princess tropes in the scene, including the damsel in distress one. Still, the princesses overcome it by saving a guy (Ralph) at the end of the movie. 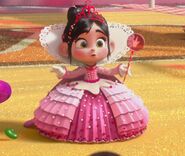